Showing posts from 2008
Show all

Some work on locating Maddocks Mill on the Eno River 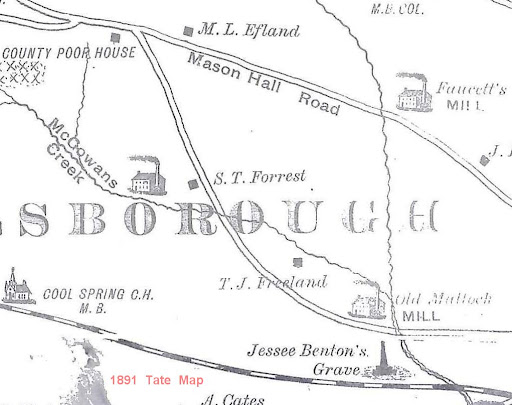 A Visit to Maddocks Mill and Hart Ford? [Click any of the images to see an enlarged version] " Old Mattocks Mill" , the site where Regulators planned the plans that went awry and led to the Battle of Alamance is just west-northwest of Hillsborough, NC near the confluence of McGowans Creek and the Eno River, on the southwest corner of that intersection. It is likely that the dam powering the mill crossed the Eno a few yards downstream from the confluence and, depending on the length of the head race, that would put the mill a few yards plus some below the confluence. The site is now under "Corporation Lake", an Orange-Alamance water source, and invisible. A worker at the nearby water processing plant said that during low water the dam can be seen in the lake bottom. It is said that the lake is almost completely silted up so, if they ever dredge the silt out of the lake, maybe we'll get a more precise location and a chance to map this important historic site.
Post a Comment
Read more

September 26, 2008
This essay considers violent opposition to technological change in surface cargo carriage. It is geographically limited to consideration of change in England's southeaster North American colonies. Land cargo carriage technology changed two or three times during the colonial era in the southeast. Not unlike change in our own time, each change bred violent resistance to change. Sometimes it was government violence directed at malefactors of small wealth (e.g. the imposition of market economy values on frontiers people that produced at least a part of the War of the Regulation), and other times it was the violence of displaced workers directed at the technology that displaced them. Actually, the first change to be considered isn't really a technological change at all but was, rather, a sociological and political change in who traded with whom. In earliest colonial times, say from 1585 through the First Powhatan War (1622) English colonists competed with one another with no
Post a Comment
Read more

August 07, 2008
People Always Come First Setting aside the issue as to whether or not people walked where animals broke the trail (which in most cases I seriously doubt), people come first. People occupied the southeastern backcountry long before the arrival of government agents to record deeds and courts to arbitrate road locations. As a rule, with some wonderful exceptions, maps come long after government. It is quite likely that "road orders" were not orders for the construction of a road. Rather, they were probably orders to bring an existing road, trail or path into compliance with government road norms using government resources and authority. Before government intervenes, paths became trails, and trails became roads. Individuals vied with one another to attract traffic to their store, their ford, their bridge. Traffic meant business. Government poltiicized that fundamental business process. As a rule, except insofar as ferries multiplied roads, over time there are fewer and
Post a Comment
Read more

Some General Comments on Stream Crossings in the Southeastern Piedmont In pre-modern times ground transportation in the southeaster piedmont experienced three technological transformations. In earliest times cargo traveled on the backs of porters. Pack horses replace porters starting no later than the third quarter of the 17th century. Wagons replaced packhorses starting in the second quarter of the 18th century. Knowing how each of these technologies crossed streams is essential to understanding southeastern settlement patterns. Geographic Conditions Travel on land in the southeastern piedmont generally requires dealing with water barriers and precious few water channels. Between Bermuda Hundred and Occaneechi Island there are about 236 named watercourses none of which unmodified was usefully navigable. Between the James River and the Savannah River at Augusta, GA there are 38 large, barrier streams cutting one's path. The least creek could, in spate, after a rain stor
Post a Comment
Read more

Finding old routes is remarkably simple. Finding remnants of the old routes is somewhat more demanding. Arbitrary Definitions: roads carry wheeled vehicles, trails are routes used by quadruped/critter carriers, and paths are the routes of bipedal/human cargo carriers. Commercial transportation is a very rational and predictable activity governed by economics and physics. A column of burdened porters moved under the same imperatives as does an eighteen-wheeled truck. They and all other carriers seek the most efficient, fastest route from "A" to "B." Efficiency issues of importance to the operator of the carrier included: security and fuel costs, and fuel/energy expenditure. Questions drivers of men, animals, wagons, or trucks need to answer about route selection include: "Are there secure places at which to stop and repair gear along the way?", "Is there sufficient and cost effective game/fodder/diesel along our route to fuel the vehicle
Post a Comment
Read more

The Technologies of Colonial Transportation: How people and cargo moved in pre-modern times

People, common people made commercial transportation work in England's southern colonies in North America. From over-burdened porters to vernacular engineers, people made it happen. Before the invention of mechanized transportation cargo traveled on the backs of porters, on the backs of beasts of burden, in carts and then in wagons. Perhaps the greatest tonnage carried in pre-modern times, when muscles powered transportation was carried in water-craft. We will not deal with watercraft now, but limit this short note to terrestrial transportation of goods. Before and immediately after the English invasion of southeastern North America at Roanoke Island and at Jamestown, Native Americans carried most commercial cargo. These porters carried tens of pounds over hundreds of miles. They were replaced by pack horses. Their replacement culminated with Bacon's Rebellion, the definitive moment of technological change. After 1676 there would be little porter borne commerce in Engl
Post a Comment
Read more

Migration into the "Backcountry" in Colonial Times - II

April 10, 2008
Geographic Barriers and the Politics of Conquest Directed Early Migrants from Virginia to the South and then the Southwest Classic migrants, settlers looking for market opportunities in 17th and 18th century Virginia seem to have, as much as possible, avoided passage through market farming country. That is, smart migrants stayed as close to the frontier as comfortably possible to avoid paying market rates for provender. Frontier farmers, farming for subsistence, sold their excess to passing travelers at whatever rates that trade would bear . In Virginia, the earliest routes of migration followed in the footprints of traders and explorers along paths and trails long known to prior residents. North from Jamestown in earliest times was a difficult option as stream after uncrossable stream flowing toward Chesapeake Bay intersected the way . These waterways forced northbound traffic westward, toward shallower fords, deeper into lands occupied by increasingly unfriendly Native Amer
Post a Comment
Read more

April 10, 2008
Frontier Folk Were Seldom Settlers and Vice Versa English colonists began migrating inland, away from their colonial plantations and settlements almost the instant they landed, first at Roanoke (1585-1587) and then on Chesapeake Bay(starting in 1607). These migrating emigrants were usually the invisible to historians and barely visible to archaeologist; indentured servants and other less affluent folk. Their motives for migrating away from their countrymen ranged from curiosity to animosity. Some went to see what they could see and never came back. Some went to escape an odious labor contract and others to escape debt or other inconveniences common in the English colonial settlements, like wholesale hunger. But, more or less, all escaped into the backcountry, the unmapped, unknown frontier lands away from the coastal enclaves. In the earliest years of settlement this meant escape into Indian country . And it flies in the face of most conventional beliefs to say that English m
4 comments
Read more

Why we look at dirt first, then paper.

April 04, 2008
A random concatenation of events got me thinking about why we do what we do the way we do. It all came together when a volunteer asked about what documents to look for in order to find a stage coach road. My reply, more or less verbatim, follows: Muscle powered transportation is my definition of "pre-modern" and those are the defining technologies for the old traces the Trading Path Association seeks. But (and this is a major but ) muscle powered transport persisted well into the industrial age and the farther into that age it persisted the farther the roads deviated from their original course. For example, railroads caused wholesale rerouting of local roads and extinguished many a town that thrived until snuffed by cessation of wagon commerce. So, by the time scheduled bus service (stagecoaches) entered the backcountry there is no knowing where the original roads went. This is one reason that I pretty much reject the normal process of history which consists of lookin
Post a Comment
Read more
More posts