Showing posts from October, 2011
Show all

Moorefield's Relation to Occaneechi Gap is of more than Orange County importance.

Occaneechi Gap and “Moorefields” Historic Site We blogged about Occaneechi Gap some time back (“An Important Gap in the Piedmont” (December, 2009), now the following note ties Occaneechi Gap to a colonial era historic site just west of gap, “ Moorefields .”  It is more than likely that historic site, now known simply as an antebellum plantation house, is where it is because of the gap; telling the story of one requires the story of the other. Before there was a recognized town at the place we call Hillsborough, there was little reason to use the Eno River fords at or near the great bend of the Eno.  Instead, traffic on an east-west axis in the central piedmont was (and still is) drawn to Occaneechi Gap as an alternative to repeated crossings of the Eno River.  It was more efficient to bypass the Eno by cutting through the gap south of Occaneechi Mountain.  The brown shaded are in the above map defines the gap zone.   This saddle gap, the center of which is just south
Post a Comment
Read more
October 17, 2011 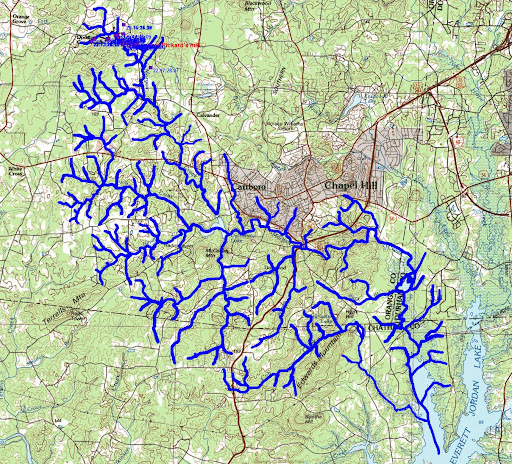 A Morgan Creek Ford Along A Lower Course of the Colonial Trading Path to Virginia The Old Ford Finder Bear in mind that in pre-modern times there were, at least, a high road and a low road linking place with place.  The high road stuck to high ground, and it crossed streams high in their course, and found use in times of high water. Morgan Creek Drainage Morgan Creek descends from west-central Orange County southeast to a junction with New Hope Creek, a major Cape Fear head-water.  It sort of cradles or embraces Carrboro and Chapel Hill, North Carolina by bending round their western edge and sliding along their south side before reach New Hope Creek.  It powered some the area's earliest grist mills, and it is one of three barrier streams channeling east-west trade routes through the area.  In low water it may have been a preferred route as the ford at Morgan Creek is on a decent flood plain over which flood waters can spread without rising too much.   The topo map
2 comments
Read more
More posts