Moorefield's Relation to Occaneechi Gap is of more than Orange County importance.


We blogged about Occaneechi Gap some time back (“An Important Gap in the Piedmont” (December, 2009), now the following note ties Occaneechi Gap to a colonial era historic site just west of gap, “Moorefields.”  It is more than likely that historic site, now known simply as an antebellum plantation house, is where it is because of the gap; telling the story of one requires the story of the other.

Before there was a recognized town at the place we call Hillsborough, there was little reason to use the Eno River fords at or near the great bend of the Eno.  Instead, traffic on an east-west axis in the central piedmont was (and still is) drawn to Occaneechi Gap as an alternative to repeated crossings of the Eno River.  It was more efficient to bypass the Eno by cutting through the gap south of Occaneechi Mountain.  The brown shaded are in the above map defines the gap zone.

This saddle gap, the center of which is just south of the parking lot at Occaneechi State Nature Area's parking lot, the road uses two unnamed tributaries of, to the west, Sandy Creek, and to the east, Mill Creek as ramps to carry traffic into the saddle.  Their waters are separated by about 2000 feet, and that is the center of the saddle.  East and west of the gap, roads converge on the the neck of the pass which at its narrowest was probably about 1000 feet wide.

On the above map, gray lines and the brown lines represent known, mapped old roads.  Note the more or less classic fork of three or four roads on the left of the map.  They came together just north of the plantation house at Moorefields historic site.  Moorefields sits on the western side of the gap.  Roads pass through Moorefield plantation north and south of the plantation house and converge on the line of the old road erased by the intersection of interstates 85 and 40.  There are at least seven separate roads concentrating on the western approach.  Not quite so obviously, there are a similar number of roads being compressed into the gap along the eastern approach.

Hart, scion of a Granville County Anglican leader, a an ambitious man, rising in Orange’s Anglican elite, married Gray’s much beloved ward, and by that means Hart inherited Gray’s very considerable estate.  In the early days of the War of the Regulation, Hart was Sheriff of Orange County  and a major Anglican figure in the “court party”.  He supported Governor Tryon against his neighbors during the Regulation, he the governor rewarded him for his loyalty with lands confiscated from Quakers at the end of the Regulation.  Subsequently, during the American Revolution Hart left Orange County probably to avoid reprisals for his Regulation days, and probably, as well, because he was, at best, a luke-warm patriot.  He turned his land holdings over to an agent, and eventually, probably not long after the Revolutionary war, the land ended up in the hands of the Waddell and Moore families.  Hence the name “Moorefields.”

Alfred Moore, a North Carolina Supreme Court Justice bought the place as a retreat but, beyond that, it was a major commercial venture consisting, at its peak, of two thousand or more acres.  In the graveyard at the plantation there are both Waddell and Moore graves, and it is clear the family was on the site until well after the “late unpleasantness.”

The plantation house seen today at “Moorefields”is too young to have been part of Gray’s, plantation.  “Grayfields,” was, by the time Judge Moore purchased it, close to fifty years old and, as a frontier strucuture it probably was no where near the elegance expect of a major piedmont planter in the early Republic.  So, Judge Moore replaced it with the current structure.  It is likely that “Grayfields” was north of the current structure, nearer what was then the main highway.  The current structure faces south,  but there are indications that it orginally faced north toward a late 19th century road that replaced the highway Gray overlooked.

All these structures are where they are because old John Gray had an eye for strategically important land.  After Gray, the strategic value of the land deteriorated until, after the railroad bypassed Occaneechi Gap altogether, it had little more than agricultural value.

Following is another TPA maps of old roads and other artifacts around Moorefields, our primary field laboratory as they relate to Occaneechi Gap.  The brown lines are all old road remnants we have mapped around Moorefields. 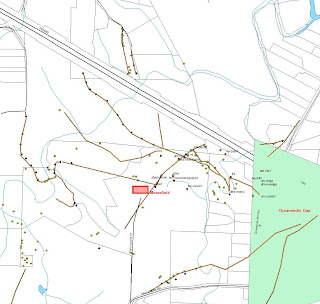