Showing posts from November, 2010
Show all

Artifacts on the Haw River between Swepsonville and Saxapahaw

Paddle Tour on the Haw River: Swepsonville to Saxapahaw, the middle fords November 27, 2010 Touring rivers is new to the Trading Path Association.  We've walked plenty of river banks, before, looking for remnants of riparian commerce and looking for stream crossings, but the idea of searching a river from the water just hadn't caught on with us, perhaps, because so few Piedmont streams will float a vessel.  We knew, though, a number of stream crossings on the Haw any one of which could be visited in a single afternoon, but to see more than just the one would take far too much time, hence the paddle tour.   In the course of the tour we saw five fords, at least a half dozen dam sites, a couple of power houses that once housed turbines, some sort of occupancy site that may have been a mill prior to government records in the area, and a canal and lock in good enough shape to know what it was even though we couldn't figure out how it work. In other words, paddling proved
5 comments
Read more 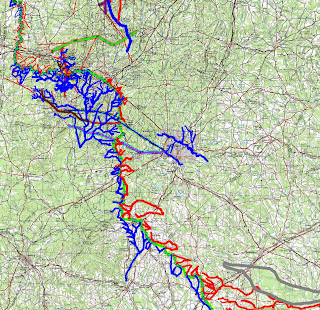 Travelers from ancient times to the present used Occaneechi Gap when traveling from the Appalachian Mountains to the Atlantic Ocean.  The course they took came to be called the Great Central Coast Path/Trail/Road.  The gap allowed travelers to avoid a one hundred and fifty foot climb and, more importantly, provided a reasonably easy way to bypass the Eno River if one were going down to the ocean and the river was high.  Or if, like John Lawson, you just didn't want to cross any more rivers. Upper Neuse-Cape Fear watershed  One can, without great difficulty, walk all the way from Seven Mile Ck, just west of Moorefields to New Bern without getting your feet wet because just southeast of Moorefields, near the intersection of NC 10 and New Hope Church Rd, the trail intersects the watershed between the Cape Fear and the Neuse River basins.   To the right is a map showing the upper portion of that watershed.  In the upper left the Great Bend of the Eno west of Hillsborough shows di
2 comments
Read more
More posts