May 23, 2010
Some Notes Taken After Canoeing on the Eno River

As rivers go, the Eno isn't much. It is not long and, except in spate, it is not deep, it is not rapid, nor broad. It is a rather typical stream of the southeastern piedmont of North America; high banked under steep but low valley walls, too shallow for commercial navigation but with sufficient basin capture to produce prodigious spates after a summer downpour . Until the advent of modern bridge materials (steel and then concrete) that could lift a bridge above these floods, the river alternated between being merely a dangerous impediment to travel to being an absolute barrier to movement. Yet, like most streams in the Piedmont of the Appalachians, the Eno powered numerous pre-modern industries, and its fords channeled movement for thousands of years. Having located a light watercraft, I determined to see what vest 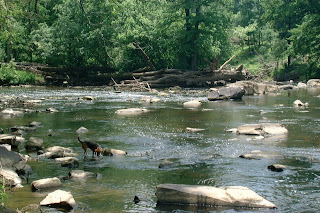 iges could be seen of transportation and industrial impacts on the Eno above, near and below Hillsborough, NC.

[In the photo to the right, Critter on the Eno]

In mid-May 2010, for two days I paddled, poled, and dragged a canoe down the Eno at low water searching for signs of human cultural impacts. People, like bark beetles and groundhogs and beaver, leave signs of their passage on our landscapes. Those signs sometimes are the only evidence of their passing. They are thus inherently interesting. Along the river signs of human occupancy were many and there was much to be seen of the natural context of that usage.

Rhododendron bushes bloomed along the river banks, generally on the south side of the river. At this point in the annual cycle green was fully returned and the depths and variety of greens embracing the brown stream was almost painful to see. Full summer sunlight will make southern greenery actually hard to look at for me. Sunglasses are useful not so much to ward off the sun as to soften the green assault produced by the sun. But it was mid-May, late Spring and it was only almost painful.

Thanks to the low water, rubble from collapsed stone dams were clearly visible along the way (at least eight clustered in four areas of fall). There were timbers embedded in the stream bottom in one place indicating that a wooden dam, once a common feature in the piedmont, once occupied the spot. I couldn't help wondering how many other wooden dam sites I passed without a clue of their previous existence. None of the mill pond sites had certain "silt wedges" visible where the pond silted up before the dam blew out.

It was surprisingly difficult to see fords along the river. There were shoals aplenty, but the river had erased all sign of any ramps that might have once eased cargo into and out of the river. There were only four old roads visible from the river and they were visible only because prior study told me where to look. It is certain that there were at Hillsborough at least six crossings. And between Hillsborough and the southward reach of the river east of the Occaneechi Hills there were at least another six only two of which were barely discernible.

Just downstream from where Highway 70 crosses the river east of Hillsborough is the old Raleigh Road ford. Back in the 90s and old, old man told me his school bus used to cross the river there in the 1930s. It was a delight to find the old ten foot wide wagon road pointing right at a junction with old Fish Dam Road near the intersection of Palmers Grove Road and Highway 70.

It was a learning experience. Canoe touring on the upper Eno is a sketchy prospect at best. Seeing road remnants from the river after the return of the forest canopy is just not likely. In low water, dam rubble is the best indicator of dam locations. Most of the dam sites found had no visible remnant abutments, so the rubble was critical to finding the sites. Silt wedges, for reasons not yet totally clear were are not visible. Most of the riparian infrastructure shown on the J. Sauthier 1768 Map of Hillsborough is still visible.

Birdsong in a quiet canyon is captivating. That bird that looks like a drab sandpiper and actually hits the water for its food is just plain fun to watch. You can get real close to a preoccupied racoon if the stream is gurgling and you don't make any noise.